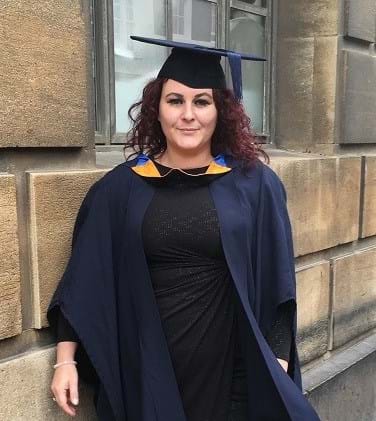 Kathleen Davies, Communications and Engagement Assistant tells us how her dyslexia diagnosis motivated her to complete higher education and go on to have a successful career.

In her role Kathleen supports the Communications Team in creating design content along with supporting internal and external communications and assisting in the teams daily tasks.

Here is her story.

“I struggled throughout school and my early career when it came to reading and writing and even became self-employed with my own cleaning business because finding employment within the chosen career seemed impossible. It was really frustrating but I did this for 5 years before I decided to go into journalism, which is crazy for someone like me but I have shown that I can achieve.

I did an Access to Higher Education course during which my tutors saw I was struggling and offered me a diagnostic for dyslexia, which is a series of tests that is done by an external company. After scoring poorly on a written exam, I was approached by my lecturer who questioned that my understanding of the subject was of a high level but it did not translate onto paper – it was barely a pass.

After the tests, I was told that I had moderate dyslexia – I felt relieved. I always knew that I was capable but always felt a there was a brick wall that I couldn’t get past. This held me back in life without a doubt. There are different variables of dyslexia and as mine was moderate, it was harder to detect and I would also find ways to hide it, for example I would use other words that I could spell.

I do look back and think that I might have achieved more in education had I been diagnosed sooner. I don’t think education meant to write me off but it felt like it did and there were times when I did lose faith. I think things are very different in schools now, there is much more awareness around dyslexia and it is being picked up sooner.

I am grateful that although it was later in my life, my condition was diagnosed. It meant that going forwards I did get extra support and it made a big difference. I didn’t do the access course thinking I will do a degree, because at the time I thought I didn’t have it in me to achieve it, but it’s exactly what i did! My original plan was to complete the access course followed by a short course into journalism. But instead, inspired by my lecturer and reassured and motivated by the huge support offered by Student Finance. I went on to graduate from university with a BA Hons in Multimedia Journalism. The lecturers at the access course and university helped me to believe in myself and to see that anything is possible.

I received extra support at university. I had a laptop with special software that read text out and checked for sense. Sometimes I would type really fast to get the information down. It sounded right in my head but when the software read it out loud there was a lot of differences. I also had one to one learning support sessions each week and extra time on exams.

After graduating, I worked as the Communications Officer at POhWER, before I joined HPFT as a Communications and Engagement Assistant. Both places made adjustments in regards to providing similar software as university enabling me to work the same as anybody else. I can confidently say that at both places, being dyslexic never impacted on me getting the job.

If any issues around my dyslexia come up, I can get in touch with Access to Work (a government scheme) that will come and do an assessment.

Awareness of dyslexia has definitely increased and there is so much in place now to diagnose and support people from a young age. At the same time I do feel that others don’t always understand the condition and more can be done. It is not just employers or managers that need an understanding, everyone does.

Dyslexia is a common learning difficulty that can cause problems with reading, writing and spelling.

It's a specific learning difficulty, which means it causes problems with certain abilities used for learning, such as reading and writing.

It's estimated up to 1 in every 10 people in the UK has some degree of dyslexia.

Dyslexia is a lifelong problem that can present challenges on a daily basis, but support is available to improve reading and writing skills and help those with the problem be successful at school and work.