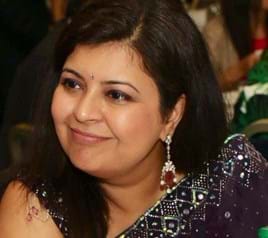 Tulika Jha, Consultant Psychiatrist at HPFT shares her story and experiences as a female BME member of staff and how she feels things must change significantly for equality to improve. It is not only about race but intersectionality across different groups.

In Tulika’s core role, she is the Consultant Psychiatrist for the adult community mental health teams in the east and south east. She looks after people in the community with a wide range of mental health conditions, and is the crossing point with crisis teams and inpatients in acute hospitals.

She is also Chair of the Women’s Network at HPFT. The network focuses on developing a mandate for gender equality initiatives such as career progression, women in leadership roles, closing the gender pay gap and supporting a good work life balance through flexible working.

She is a CQC specialist adviser, and a visiting lecturer at the University of Hertfordshire. She manages to fit these roles within her part time working of three days.

Here is her story.

I have always had a deep interest in identity and how it can affect an individual’s thinking and influence their life. During my time at sixth form, I was the Vice Chair of the Student Council and responsible for the multicultural society.

In regards to my career, there was never any pressure on me to follow in my parents footsteps but I would say there was some modelling, and as a result, I naturally headed that way. From early on my interests were really in psychology and mental health. I studied at Guys and St Thomas for my medical degree and immediately went into a psychiatry rotation consisting of seven years of specialist training. My husband and I met at university and we trained together.

When I was young my grandmother had schizophrenia and I noticed her care was lacking. To make matters worse, I was surprised to see that coming from a family of doctors, but being of an Indian background, there was pressure to keep my grandmothers mental health condition from the community. I saw her suffer from loneliness and not being able to access the full package of care. It was then I knew that things must change and I became a part of the cause.

In regards to people of BME being treated differently, I think that a lot of the time it is difficult to say as it is not obvious. To add to the ambiguity, it’s not just the fact that someone is a man or a woman, of a BME background or has a MH problem – but it is an intersection of all of this.

This can make any discrimination or injustice difficult to understand. I have faced inequality because of my various characteristics, being Asian, a woman, having suffered ill health - it all has a cumulative effect.

I do question sometimes, "Have we stopped fighting for justice because things are not so clear cut? “ People may not talk about it because they don’t want to be seen as a trouble maker, or they may want to progress in their career paths and not let these issues it hinder their efforts.

There are a high number of Asians in medicine so in that sense I never felt I was treated differently however I did feel disadvantaged as a woman. When I returned to work part time after taking maternity leave, I was overlooked for certain positions, and felt like I did not have the same impact as I did when I was working full time.

In addition, juggling a career and family, mixed in with the cultural expectations at home, made my life somewhat tricky to navigate at the time and I struggled to meet expectations all round. Looking back, I feel that some of these expectations need not have mattered so much and we should try and make work life balance easier for women and men so that life is enjoyable at all stages,

I feel that race is one aspect of a larger issue, and that being different in any way is a target for inequality. Generally, the discomfort of talking about these issues is so intense that people just don’t talk about it. We need to make it easier for people to talk openly. People need a high degree of psychological safety before they can show their vulnerabilities so the onus is on ALL of us to make that safety prevail in our culture.

I know the NHS has achieved so much and we have many things to celebrate, but at the same time there are things we need to look at. We take these challenges on fiercely rather than sugar coating them.

As members of staff in the NHS, we need to be kept informed about the evidence and figures from the work done around Workforce Race Equality Standard (WRES) and changes that are happening as a result both locally and nationally. For example, we need to be having open conversations about bandings of BME staff, are they progressing or are they stagnant? And if they are stagnant, questioning why they are not moving forwards. This applies to gender pay gap, leadership positions based on meritocracy and value given to all roles regardless of position.

No person has just one identity; they are a combination of race, religion, gender, being a parent, carer, service user and so on. These multiple identities require multiple solutions. If all of the staff networks at HPFT come together and think about how to tackle inequality, then we will have a better chance.

Having a sense of community belonging and team can mean so much for people who have always felt like a bit of an outsider. I am grateful to have that with my team and together I hope to make it a possibility for many other within our organisation and communities."