Keeping it in the family

Belinda Clayton is working for HPFT at Lambourn Grove and never envisaged working for the NHS, let alone in the field of mental health. With her two children at university and 27 years after graduating in French at university, she said: “I find myself at an incredibly exciting time of life. My new career has led me to an area I had never thought of exploring.”

“After volunteering at Lambourn Grove doing speech and language therapy, I’d intended taking my career on that path. I then accepted my first employed role as an occupational therapy support worker - although the work can be challenging, I immediately realised it was for me.”

Belinda has been reflecting on her up-bringing by both parents who provided her core values which are to be as kind and patient as possible. Belinda’s mother is a former state registered nurse (SRN) and midwife. Belinda said: “I believe my mother’s influence, with her gentle and loving nature, has put me in particularly good stead to help support some of our most vulnerable people.

“Her background as a SRN and midwife provided me with an outstanding role-model; someone who always remains calm, non-judgmental, and who over the years has demonstrated that it’s important to show love to all, including those who appear not to respond, in the knowledge that acts of kindness, however small, can make an enormous difference to someone’s well-being.“ 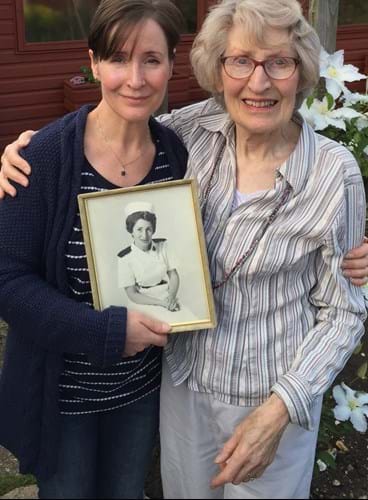 Belinda’s mother, Suzanne Locke is a former SRN and midwife. She’d been interested in nursing since her early teens and went to King Edward Vll Hospital in Windsor at the age of 19 to begin her training, qualifying as a SRN in 1958.

Suzanne was appointed as the private nurse for Lord Alexander of Tunis and when the Queen attended a tea party in the nurses’ home, she asked in advance to meet his nurse. She was so awestruck by the Queen, she was rendered virtually speechless! The Queen enquired about her plans for the future and Suzanne explained she intended to complete a post-graduate course in plastic surgery and burns at Stoke Mandeville. Her training began in 1959 and she saw the famous Dr Guttmann - founder of the Paraplegic Games.

Later on Suzanne studied midwifery. Being from a rural community and fearful of being called upon to help at a birth, she felt this was a wise career move! By chance, Suzanne went to the same school as Jennifer Worth, the author of ‘Call the Midwife.’ Part of her training involved work in the community and travelling around by bicycle - she qualified in 1961.

One summer’s evening in 1964, Suzanne was about to leave a rather dull party at the nurses’ home, when a couple of young men turned up and one in particular caught her eye. Rodney and Suzanne were married six months later and have two daughters.

Belinda’s sister Joanna was an RGN and her father Rodney has recently joined HPFT as a volunteer ‘in-house’ musician at Lambourn Grove. Belinda said: “I feel proud to be continuing the family tradition of caring for those in need and I’m thrilled to be part of the 70 year celebrations. Having just turned 50, I look forward to the next 20 years, which I’m sure will be full of learning, challenges, successes and new memories.