Hertfordshire’s journalists have gathered to sign a Charter showing their commitment to helping prevent suicide in Hertfordshire by reporting the subject with sensitivity.

Research by Samaritans indicates that the way in which possible suicides are reported in the media can have a profound impact on people who might be considering taking their lives. Samaritans developed guidance in this area and the Hertfordshire Charter is based on this guidance. 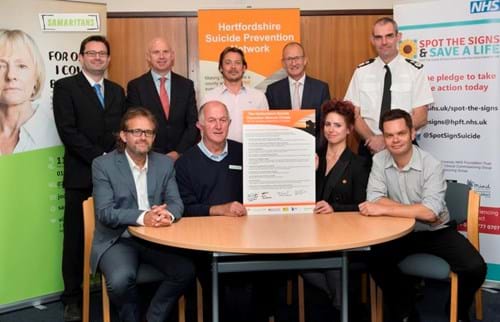 HPFT’s Chief Executive Tom Cahill said: “Suicide is the biggest cause of death for men under 35 and we know Hertfordshire is no exception in this. Incidents in Hertfordshire are low compared to regional and national levels, but each and every death is a tragedy for the individuals and their families. It is vital that we work together to help vulnerable people and prevent suicide.

“The response to the reporting Charter has been really positive. We welcome this firm commitment from so many local journalists to report stories relating to possible suicides in the most responsible and sensitive way.“

Robert Stringer’s son Hector took his own life in 2011. Robert has since founded a suicide and crisis prevention and help resource charity called Hector’s House. He said:

“Those left behind - family members, friends, colleagues, even a wider circle of people who might identify with the individual are at great risk from insensitive reporting. They are highly vulnerable themselves and so reporting of the suicide needs to be treated with great care to spare them additional pain and in order to ensure that they don’t end up making the same wrong decision. They are already in tremendous pain.

“Responsible reporting with reference to the Samaritans media guidelines may raise valuable awareness and could save lives.”

On World Suicide Prevention Day, police officers working in every district and borough across Hertfordshire will be receiving the Spot the Signs training.

Hertfordshire Constabulary’s Chief Constable Charlie Hall welcomed the journalists and said: “The impact of a suicide is huge – not just on family but friends, colleagues and others besides. As police officers we see the harm caused first hand if we have to deliver the terrible news to someone that a loved one has died.

“The aim of the Suicide Prevention Network is to prevent deaths from occurring and where possible reducing any further harm occurring as a result. It is heartening that journalists representing so many media outlets in Hertfordshire are also motivated by the same cause, and have come forward to sign the charter.”

Hertfordshire County Council’s Cabinet Member for Public Health, Richard Roberts said: “Hertfordshire has a very strong partnership approach to preventing suicide and we are very grateful to our local media for showing such support in helping us take a united stand on this.

“World Suicide Prevention Day raises awareness of the devastating impact suicide has on families, friends and communities. This Charter will help us move closer to our vision.”

Please find details of some of the support available on our website here: http://www.hpft.nhs.uk/information-and-resources/spot-the-signs/urgent-help/