We are extremely proud that Tom Cahill, Chief Executive at HPFT has been recognised in the HSJ’s top 15 NHS trust chief executives for 2017.

As Chief Executive, Tom has successfully led major programmes of change across HPFT and in 2015 the Trust was rated ‘Good’ by the CQC. In 2016 Tom was appointed as the lead for the Hertfordshire and West Essex Sustainability and Transformation Plan (STP).

Being named in the HSJ’s top 15 NHS trust chief executives for 2017 recognises Tom’s commitment to, and achievements in, improving mental health and learning disability services, as well as his role as a system leader.

The chief executives were judged on three main criteria: the performance of their trust; their contribution to the wider health economy or the NHS; and their personal example. 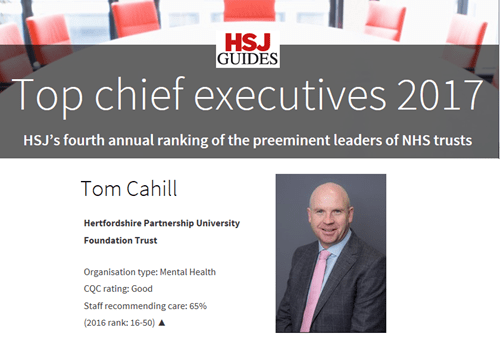