Over the years, the quality of HPFT services and staff have been recognised by external awards. These have included: 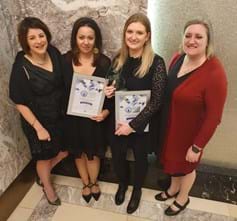 Gold winner Thea Radburn said: “It was a real honour to attend the awards and hear about all the amazing social work going up and down the country.  I was so glad to be able to share the experience with those who have supported me in the Trust since I started here as a student.  I’m so proud to work in an organisation that champions the role of social workers and what they can bring to supporting people with mental health problems.”

Ingrid Richardson, who won silver said: “The Social Work Awards was a fantastic opportunity for the profession to come together and share stories of good practice. Social work has a more important role than ever to play in supporting the rights of some of the most vulnerable members of society.  My social work career wouldn’t have been possible without such a supportive organisation."

HPFT’s Executive Director for Quality and Safety and Chief Nurse Dr Jane Padmore attended the awards and said: “There are around 90,000 social workers on the HCPC register and having two finalists, from HPFT recognised at these national awards is a fantastic achievement in itself." 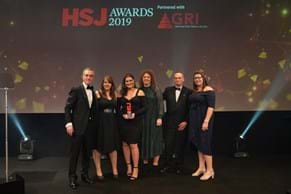 one of three finalists from HPFT who attended the awards on 6 November. All our finalists went through a rigorous selection process and were chosen for the finals, based on their ambition, visionary spirit and demonstrable positive impact on the experiences of our service users and staff:

HPFT’s Deputy Chief Executive and Executive Director of Finance Keith Loveman attended the ceremony with our finalists and said: “I’m really proud of all our finalists for receiving this well-deserved national recognition. They have all embraced new ideas for improving our services, with passion, hard work and dedication – I couldn’t ask for more.I’m also delighted that our CAMHS Home Treatment Team won their category. They’ve developed a highly effective model of care which is making a real difference to the lives of young people and is being shared nationwide to benefit others.”

In recognition of her efforts to promote diversity and inclusion Sam  received the award for Stonewall’s East of England Trans Ally of the Year.

Whilst she is very modest about her achievements and not a fan of gongs – “I’m doing my job ” she says -  Sam appreciates the benefits that such an award brings in raising the profile of trans issues, demonstrating HPFT’s commitment to Equality Diversity and Inclusion (EDI) and giving trans people an identifiable resource for information and support.

The HPFT Wellbeing Team won the category for IAPT our Community Perinatal Team was highly commended in the Perinatal Mental Health category.

Chief Executive Tom Cahill said: “I’m so proud of our staff being recognised nationally for their outstanding work. It’s not just about the awards - it’s about great people doing great things for our service users.”

The Improving Access to Psychological Therapies (IAPT) service provides an integrated service with West Herts Hospitals NHS Trust and Hertfordshire Community NHS Trust for people living with long term conditions like diabetes.  The team is already the regional champion in the Excellence in Mental Health Care category from the NHS70 Parliamentary Awards and has now won the IAPT award at the PPiMH awards. The team beat tough competition from many other worthy entries from all around the country.

The Community Perinatal team was Highly Commended at the PPiMH awards for creating a dynamic new team supporting women in Hertfordshire who are either experiencing or at risk of developing a range of mental illnesses (as well as their babies and families) from pre-conception to the baby’s first birthday.

In 2016 our CAMHS Eating Disorders Service won the HSJ Award for Compassionate Patient Care for their Hospitals at Home scheme.  The two day course was created to teach parents skills to help their children overcome eating disorders.  This lead to a reduction in the demand on CAMHS clinics being reduced and funding was increased to develop the eating disorder service. HSJ judges said the scheme “feels very person centred” and “really focused on prevention and early intervention”.

Celebrating two years in operation of here for you who support over 20,000 of our health and care staff with confid… https://t.co/njTXnbKyJw